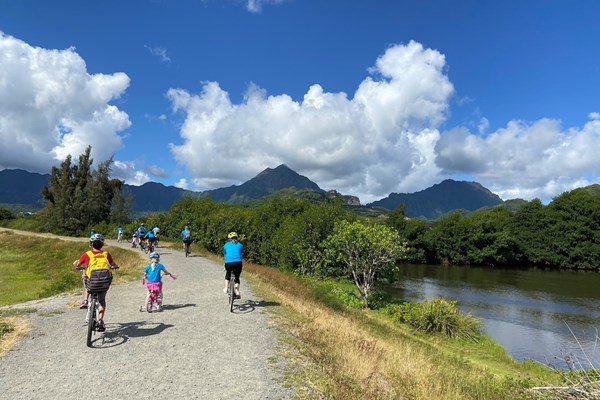 We’re all familiar with the popular saying, “Once you learn to ride a bike, you never forget.”
Many bicyclists who participated in the Hawaii Bike Challenge this past May seem to have adopted a new take on that old saying: “Once you start riding your bike, you can’t stop.”

This was the intent of the Hawaii Bike Challenge, which was created with a mission of encouraging Hawaii residents to give bicycling a try or use their bikes more frequently for different types of trips. The free community challenge — presented by Blue Planet Foundation and Love to Ride with support from Ulupono Initiative, G70 and Hawaiian Telcom — was open to riders ages 13 and older, offering a variety of prizes for friendly individual and team competition.

“Our goal was to get more people across the Islands to feel comfortable on bicycles, and that starts by encouraging people to just give it a try,” said Kianiwai Jones, director of mobility with Blue Planet Foundation. “We wanted to incentivize positive behaviors that replace car trips to collectively reduce our carbon footprint.”

Community response was enthusiastic. The Hawaii Bike Challenge attracted 837 riders from 60 workplaces, with 28% of participants identifying as new bike riders. Together, the collective cycling of participants covered more than 374,000 miles on just over 26,000 bike trips, with their efforts reducing nearly 21,000 pounds of carbon emissions over the full month of the challenge. (Check out the top bike riders, categorized by trip miles and number of trips, on the Love to Ride Hawaii website here.)

The Hawaii Bike Challenge’s Most Trips category saw Ivan Lui finishing in first-place with 106 trips. Lui regularly walks to his work at Safe Haven — a program created by Mental Health Kokua providing housing for single, homeless adults with mental illnesses — where he is responsible for keeping its facilities shiny and clean, but he bikes for all his other daily errands. He said he was “surprised” to learn he was the Most Trips category’s top finisher.

Lui’s transition to biking occurred at the same time he was making other major life changes. He sold his car 10 years ago following a divorce and traveled the world. Upon returning to Hawaii, he realized he didn’t need a car and has been happily car-free ever since.

Lui worked in Waikiki prior to his current job with Safe Haven, commuting about 9 miles round trip on weekdays. He believes the biggest obstacle to getting more people bicycling is their concerns about safety. It’s a topic Lui is well acquainted with having worked with the Hawaii Bicycling League as an instructor for new bicyclists.

Matthew Gonser placed among the top 20 finishers in the Most Trips category of the Hawaii Bike Challenge. As chief resilience officer and executive director of the Office of Climate Change, Sustainability and Resiliency for the City and County of Honolulu, he practices what he preaches. Gonser has commuted for nearly 10 years from his homes in the McCully and Makiki areas to his workplaces at the University of Hawaii at Manoa, Kapalama Hale and, currently, the Frank F. Fasi Municipal Building. With a downhill cruise and traffic lights timed in his favor, it takes him about 10 minutes to get to work. His return trip home takes about 15 minutes.

Occasionally, Gonser will take a long, difficult bike ride to Waialae Beach Park via Diamond Head, ride along the Kakaako Waterfront through the Ala Moana area, or take TheBus west and ride the Pearl Harbor Bike Path. He’ll also bike for short trips of 5 miles or more from Aala Park to Kaimana Beach, or for small errands like grocery shopping or farmers market trips.

“Nothing can beat biking around town (with its) great and growing Complete Streets and bicycling facilities,” Gonser said. “When the infrastructure and connections are there, the experiences are that much better, and our perspectives of how far and how long we can bike are changed because it’s enjoyable.”

Like many others wary of the activity, Gonser had initial reservations about biking.

“I was a bit hesitant myself nearly a decade ago for a variety of reasons,” he admitted. “But over time, I worked biking into commuting and other trips and now can barely remember some of the conditions I used to experience. I’m so spoiled now that the other day I went from a protected bike lane to a striped bike lane and thought, ‘Whoa, what is this with cars zooming by so close!’ Bike riding is fun and becoming more fun with better facilities!”

Good for your health and the environment

Gonser’s personal commitment to his own health and the health of others around him inspired him to make the leap to biking. That, he said, and “seeing others and just knowing that I could, and I should. Also, the climate and my own health. I was fortunate to find an apartment near campus so many years ago when I first started working at UH and was in no position to own a car or deal with the headache and expense of parking.

“If you’re able-bodied and in town, there’s no reason to drive for trips of a certain distance. Short trips are on par with biking and driving and busing from start to finish. The more we can eliminate short non-commute vehicular trips, and especially short commute vehicular trips, the healthier we’ll be as individuals, the less public space we’ll need to devote to storing vehicles, and the more space we can devote and design for people-centered environments.”

Gonser hasn’t owned a car for the past 10 years and admitted not having one can sometimes be a bit limiting for some activities. Still, he said that in a number of areas around Oahu, taking TheBus, walking or biking make many activities “completely doable.”

“Though (giving up a car) still may not be doable for most households, the more others can subscribe to people-powered movement the less conflict and competition there’ll be for those who still need to move around in their cars,” Gonser said. “Next, we need to support the transition to clean vehicles powered (and) fueled by renewable energy!”

Nicki Smith is another Hawaii Bike Challenge participant who walks, or we should say, bikes the talk. Like Gonser, she was also a top 20 finisher in the Most Trips category, joining with others at her workplace, the Oahu Metropolitan Planning Organization, to ride together as a team in the Hawaii Bike Challenge.

Smith, who was raised on Maui and now calls Honolulu home after being away for college, said she realized early on she loved the urban lifestyle and having a minimal impact on the environment.

“Those that don’t like being in traffic should realize they are the traffic,” she said with a big smile.

Smith’s authenticity and optimism for the future are readily apparent. When not working remotely, Nicki looks forward to biking the 2.4 miles from her home near Ala Moana Center to her workplace near the downtown post office, a trip she has made regularly for the past three years.

Still, she is always aware that biking requires constant vigilance.

“I believe in taking radical responsibility when riding,” Smith said. “I realize parked cars next to the bike lane on King Street may limit the visibility of drivers and I make sure to give a shaka to drivers for being considerate of me.”

Mike Taratko, a principal consultant for IT security with Hawaiian Telcom, placed among the top 20 finishers in the Most Trips category. Through working remotely from his home in the Diamond Head area throughout the COVID-19 pandemic, he regularly makes the 5-mile “fake commute” to Hawaiian Telcom’s downtown Honolulu location on Bishop Street just to get his blood pumping and put him in a better mood for the workday challenges ahead. Taratko began commuting to work by bike in 2019 before the pandemic and finds it easy to weave exercise into his schedule this way instead of trying to fit in a run or walk after work.

Taratko is clear about his priorities and what he wants at the current stage in his life. He decided he wanted to join Hawaiian Telcom two years ago after learning from a friend that the company had on-site gym facilities, which would allow him to bike to work. Taratko said Hawaiian Telcom’s parking garage is also safe for bicycles.

He enjoys bicycling recreationally, as well, often riding to Queen’s Beach or Kaimana Beach, his 12-year-old daughter following right behind him.

A serious commitment to biking

The Hawaii Bike Challenge was successful in engaging and encouraging residents and businesses statewide to take on bike riding, attracting both new and longtime riders to compete in the event. A post-event survey revealed 95% of participants would take part in a future challenge — a good indication of an awesome future for the event. Stay tuned for the announcement of another Hawaii Bike Challenge in 2022 with even more riders and, hopefully, you, too!

Go back to October 2021 eUpdate