To intervene in the purchase of Hawaii’s largest electric utility

When Florida energy company NextEra Energy proposed in December 2014 to purchase Hawaii’s largest electric utility, Hawaiian Electric Co., for $4.3 billion — one of the biggest business deals in state history — it drew a lot of attention.

Ulupono Initiative joined the formal regulatory process as one of 28 intervenors, taking the stance that the proposed merger needed to be in the best interest of the public. In July 2016, the Hawaii Public Utilities Commission (PUC) denied the merger in a 2-0 decision, with one commissioner abstaining from the vote. The PUC’s decision directly quoted the key conditions Ulupono developed and shared publicly throughout the campaign.

In addition to regulatory intervention testimony, Ulupono created and executed an awareness campaign, "Fair Energy for Hawaii," including external media relations, advertising, op-eds, a website and stakeholder engagement to support its position 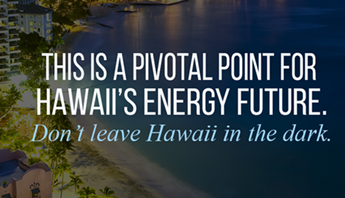 “It was a team effort. We were glad to do our part to support local energy generation and ownership.” — Murray Clay, President, Ulupono Initiative