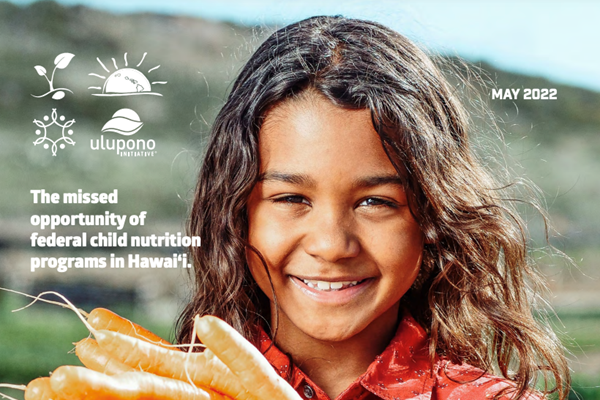 Since 2000, Hawaii has missed out on more than $200 million in federal funding for the state’s school meal programs, according to a new report titled “Feed our Keiki, Support our Schools, Help our Farmers,” published by Hawaii Appleseed, Hawaii Children's Action Network, and Hawaii Afterschool Alliance, in partnership with Ulupono Initiative.

Nationwide, school districts receive funding from the U.S. Department of Agriculture (USDA) to provide nutritious meals. According to the report, the USDA is providing far less funding to Hawaii than it should, resulting in a financial crisis for Hawaii’s child nutrition programs.

“Because of this lack of federal funding, Hawaii’s state government has to pay between $20 and $30 million annually to keep feeding kids,” said Nicole Woo, director of research and economic policy at Hawaii Children’s Action Network. “Other school districts across the nation pay much less. This means that in Hawaii, less funding is available to cover other important education costs, like pre-K programs, afterschool programs, and better pay for teachers.”

The report traces the discrepancy in a federal analysis that has not been updated since 1979. The report further calls on the USDA and Congress to pass an emergency appropriation for Hawaii to make up the difference.

On May 20, Hawaii’s Congressional delegation jointly asked the USDA to cover the “full, accurate cost of school meals” in the state.

“For too many children, these federally-subsidized meals are the last nutritious meal they will have before the next school or program day,” said Diane Tabangay, executive director of youth programs at the YMCA of Honolulu. “Parents tell us that knowing their children were fed a complete after-school supper helps to keep their grocery expenses down and makes it possible for them to meet other essential needs such as electric bills or gas.”

There are also implications for the Hawaii Department of Education’s (Hawaii DOE) farm-to-school goals.

“Maximizing available federal funds for student meals is good for our keiki, good for our schools, and good for our local farmers and ranchers,” said Jesse Cooke, vice president of investments and analytics with Ulupono Initiative. “Leaving federal dollars on the table short-changes our entire community because a portion of those funds would go to Hawaii's food producers, with that percentage growing each year as the Hawaii DOE makes progress toward its goal of 30% locally sourced meals by 2030.”

The complete report can be found at hiappleseed.org/publications/feed-our-keiki.