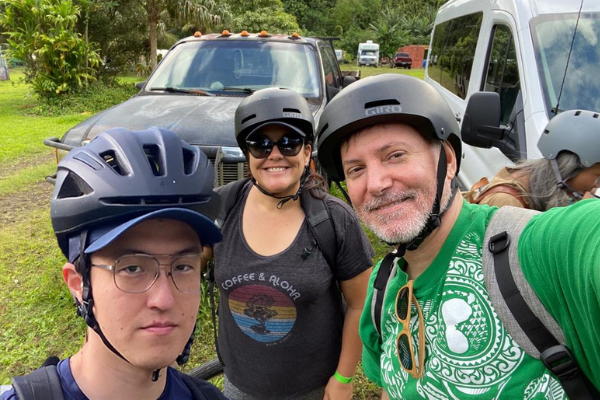 On April 2, Ulupono team members Keith, Kathleen, Katie, Katie’s child, and I participated in KVIBE’s Kalihi Ahupua‘a Ride. As this event was Katie’s idea, I gladly offloaded all the effort in attending onto her and rented a bike and helmet (precious cargo). Katie noted that the bike rental cost was around $30. I was surprised at this cost as kamaʻāina can purchase a Commuter Pass from Biki for only $15 dollars a month. This pass comes with unlimited rides per month for up to 30 minutes each. All this is bundled in the convenience of over 100 stations throughout urban Honolulu! But I digress.

As we arrived at Hoʻoulu ʻĀina in the back of Kalihi Valley, we were dispersed into small groups with other event attendees. We were each to share our story of why we were attending the event. I do not recall the exact story I shared, but I do recall that I did not share my initial reaction of “My Boss told me to.” After we shared our stories, it was showtime — time to ride!

As we prepared to set out, I took a closer inspection of my bike. It appeared to be of an older vintage — possibly older than myself. It had a huge basket which some of the youths on the ride admired for its enhancement of the bike’s aesthetics. I wrapped up my inspection of the bike just in time for the group to depart from our staging area.

I made it half a mile before one of the KVIBE coordinators informed me that my rear tire looked like it was losing air. It was strange to run into mechanical issues with rented biking equipment as I have never had problems with Biki rentals using my Commuter Pass.

Regardless, the road was congested with single-occupancy vehicles, and there was no time to make field repairs, so I persevered and hoped for the best. The hope was for naught as less than another half-mile down the road, my tire was completely flat — a blown tube. At this point, I became concerned as the event was the “Kalihi Ahupua‘a Ride,” not the “Kalihi Ahupua‘a Push Your Flat Tire Bike Down the Road with No Sidewalk.” Thankfully, a support truck arrived shortly after.

There was no room in the cab, so I jumped in the back alongside my trusty bicycle. The support truck soon arrived at KVIBE’s facility, where I disembarked with my bike. Here the KVIBE coordinator recognized me as the guy who somehow got a flat tire within the first three minutes of the event and replaced my tire tube.

After painting a mural, we visited Puea Cemetary, Niuhelewai (Lo‘i Kalo Mini Park), Kalakaua Park, and Mauliola. Each of these places had stories behind them that I was not aware of even after spending my entire life on the Oahu.

The transit between each of these sites was exciting, as riding a bike on the road is generally not the norm in Hawaii. Thankfully, the City and County of Honolulu’s Complete Streets Office is hard at work to make biking and other multimodal methods more accessible for Oahu commuters.

Overall, it was a very interesting experience to visit the places I had never visited before using a mode of transportation I rarely use. I am looking forward to further expansion of multimodal infrastructure throughout the island to encourage people to use methods other than single-occupancy vehicles for their commuting needs.

Bike lanes will soon become a vital part of the Kalihi Valley street grid as the City and County of Honolulu accommodates area cyclists and further extends and evolves its Complete Streets project. Plans for Complete Streets expansion in 2022 include bikeways through the Downtown Honolulu, Chinatown, and Ala Moana-Kakaako areas to provide safer, more direct, and eco-friendly connections.