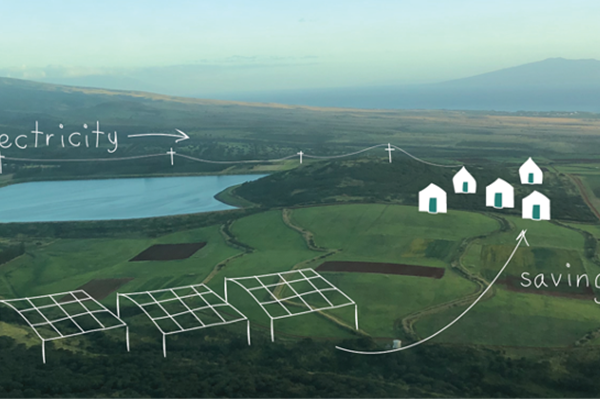 Some may be quick to characterize Molokai as historically resistant to renewable energy projects, but that would be overlooking the deeper story.

“We’ve never been resistant to renewable energy,” said Lori Buchanan, who was born and raised on the island. “What we’ve been resistant to is top-down projects that paddle up on our shoreline and say hey, we’re going to do this, and they don’t consult with the community.”

The tides changed in 2015, when the Hawaii Public Utilities Commission approved the Hawaiian Electric-administered Community-Based Renewable Energy (CBRE) program, creating the right conditions for the Molokai community to think critically about how to contribute to its own renewable energy future meaningfully.

Enter the Hoahu Energy Cooperative. Driven by the desire for renewable energy projects that adhere to community-established principles, including responsible land use and local ownership, dedicated Molokai residents, like Buchanan, formalized an energy cooperative in 2020, with a mission to produce locally owned, affordable renewable energy that will benefit members, the community and the environment. As a Native Hawaiian, Buchanan sees this as a long time coming.

Although the CBRE program has been active for several years, it wasn’t until Hawaiian Electric’s recent draft Request for Proposal (RFP) for Molokai, which seeks up to 2.75 megawatts (MW) of renewable energy, that the opportunity presented itself for the community to assume the role of lead navigator in its energy future. The prospect awakened the entrepreneurial spirit on Molokai, while also tapping into a long history of advocating for just development.

As the old adage would have it, “fortune favors the bold,” and the founding members of the energy cooperative were rewarded with a kindred spirit, Ali Andrews, co-founder and chief executive officer of Shake Energy Collaborative (Shake Energy). In January 2019, she brought a much-appreciated sense of empowerment and expertise that, Buchanan states, “the Molokai community has been waiting for.”

Andrews’ first introduction to Molokai was in 2018, while volunteering for a CBRE project being developed by Groundswell and a community advocate named Emilia Noordhoek, formerly of Sustainable Molokai. These experiences were formative—helping her learn “where the rubber meets the road” in renewable energy project development, particularly around the community design element.

Andrews quickly learned that the community dictated the flow of the meeting and has been learning from the Molokai community ever since.

Using a co-design process throughout project development, Ali and her team work with community champions to create opportunities that allow interested community members to make important decisions about the energy projects in their backyard. On Molokai, Shake Energy has supported Hoahu Energy Cooperative in a number of ways—project design, facilitating the community design process, co-op formation, and so on.

According to both Buchanan and Andrews, many developers fail to recognize that communities often feel like they have to constantly be on the defense. Regardless of the project, many communities, especially Molokai, have been playing defense for a long time—even to just get a seat at the table. Through Shake Energy’s process, access to the table is one less thing to fight over, freeing up valuable time for community members to proactively engage in the conversation.

As with many new approaches that attempt to remedy old challenges, Andrews was met with skepticism to this process. In fact, she was told at the outset by those looking in, that a community-first approach would take longer.

That has not been the case.

“A lot of the expertise that is needed in energy development—particularly in the where does [the project] go, what does it look like, how do we permit it—all of that expertise is in the community,” Andrews explained. “So we got really far along, basically almost up to the point of single-line diagrams, without having an engineer in the room, because the smartest people who know where to put this stuff and how to strategize are in the communities... So I think there’s a lot of power in leveraging that knowledge, working together and getting a lot further.”

“The difference was Ali listened,” Buchanan added. “And she’s still here. I give her a lot of credit for that, because this community, like most communities or other indigenous peoples, like myself, we really go a lot on trust. And you have to earn our trust.

“And she said we can do this. And, of course, we said we’ve been waiting for this forever. So it was a natural progression to form Hoahu Energy Cooperative Molokai, and the CBRE was that vehicle that is making it possible. We’ve never had that before.”

While the most recent CBRE RFP is still under review by the Public Utilities Commission, once approved, Shake Energy and the Hoahu Energy Cooperative hope to put in bids for a 2.75 MW PV and a 2.75MW-11MWh Battery Energy Storage System (BESS) split across two sites:

250 kW solar canopies with associated 250kW/1MWh BESS, placed either at the location above the parking lot at Kualapuu Community Center, or on a parcel of the      Department of Hawaiian Home Lands (DHHL) with agricultural production below it (the latter option would be developed in partnership with the Hoolehua Homestead Ag Association if site control can be confirmed in a timely manner); and

at or near the Palaau Power Plant, where 2.5 MW ground-mounted solar and associated 2.5 MW/10MWh BESS would be placed on utility-owned land or nearby privately-owned property if RFP site restrictions are relaxed.

In total, the project could meet the electricity needs of approximately 1,375 households—about half of the island’s residential customers and 20% of its total energy consumption.

When asked what’s needed for this effort to be successful, Buchanan stated, “We need a fair shake. Honesty, transparency and trust … without those this is not going to succeed.”

Beyond that, other partners and investments may be necessary to provide capital and maximize tax benefits available for the CBRE project(s). Additional funding is also being sought through a combination of grants, debt and equity financing to cover the approximate $15 million total project costs.

Regardless of what’s ahead, both Andrews and Buchanan expressed gratitude for other entities that have stepped forward to support the development of both the energy cooperative and the CBRE projects.

Partners include Mana Pacific, a Maui-based public benefit energy development company selected by the community through a virtual interview process of 6 co-developer candidates to partner with Shake Energy. The Kohala Center is also aiding the project with technical assistance for the energy cooperative. In addition, if the DHHL parcel is secured for use, the Hoolehua Homestead Ag Association will co-design and manage the agricultural production under solar canopies.

Others lending support include Earthjustice, Life of the Land, and the Molokai Clean Energy Hui.

Looking a decade into the future, Buchanan hopes there will be additional RFPs and opportunities for the energy cooperative to help the island not only become 100% renewable, but also energy independent.

“We just have to,” Buchanan said. “To ensure the perpetual care of Molokai’s resources, it’s absolutely critical.