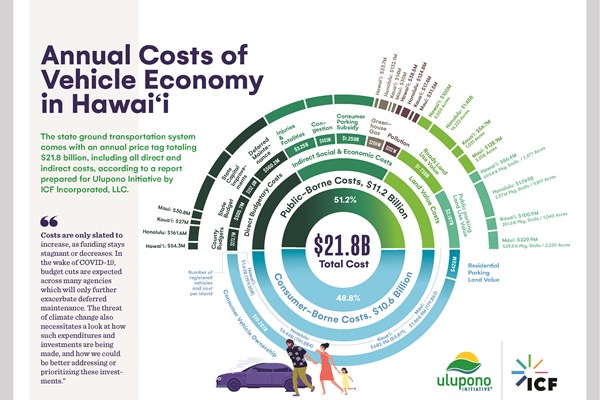 Hawaii’s vehicle transportation system has an annual price tag totaling $21.8 billion, including all direct and indirect costs, according to a newly published report, “The Costs of the Vehicle Economy in Hawaii,” prepared for Ulupono Initiative by ICF Incorporated LLC.

Key findings in the report related to the costs of Hawaii’s vehicle economy include:

The report’s conclusion notes, “One of the main concerns with the size of the costs of the vehicle economy is that costs are only slated to increase as funding stays stagnant or decreases. In the wake of COVID-19, budget cuts are expected across many agencies, which will only further exacerbate deferred maintenance. The threat of climate change also necessitates a look at how such expenditures and investments are being made, and how we could be better addressing or prioritizing these investments.”

Kathleen Rooney, Ulupono Initiative’s director of transportation policy and programs, adds, “It is critical that we understand these transportation costs and impacts, and that we evaluate whether these are the best financial investments we can, and should, make.”