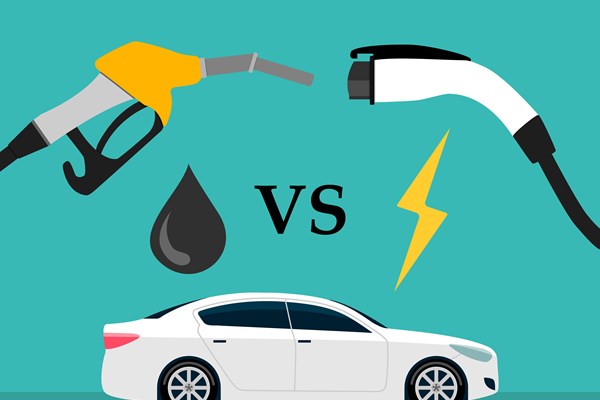 Increasing, widespread adoption of electric vehicles (EVs) in recent years has spawned much debate, with disinformation even becoming a topic of discussion during 2020’s tumultuous election cycle. In the interest of providing crystal-clear and up-to-date facts, Ulupono Initiative below debunks some of the myths and misconceptions surrounding CO2 (carbon dioxide) emissions from EVs versus internal combustion engine (ICE) vehicles, EV purchase and maintenance costs, and what the global shift to EVs means for job and economic growth. Read on.

In the big picture, are lifecycle emissions really that different between EVs and ICE vehicles?

Though EVs are zero-emission vehicles, some critics say the environmental benefits of EVs are negated by their need to recharge via the existing electrical grid, which primarily relies on fossil-fuel generators. This argument is inaccurate. Although many EVs currently recharge using a fossil-fuel infrastructure, the amount of CO2 created by the process is significantly less than that of operating an ICE vehicle.

While this does not totally eliminate emissions, like walking or biking, driving electric produces 63% less emissions per mile driven compared to driving an ICE vehicle, even factoring in EV recharging via the electrical grid.

When full lifecycle emissions are considered (e.g., fuel combustion, production, distribution and storage of fuel, shipping and disposal of vehicles), EV emissions are approximately 50% that of ICE vehicles. A Nissan Leaf has half the GHG emissions of an average ICE car and 38% fewer than a compact ICE car, according to a paper published in Environmental  Science and Technology (Personal Vehicles Evaluated Against Climate Change Mitigation Targets, September 2016)

Over time, the per-mile emissions produced by the electrical grid to recharge EVs are anticipated to diminish significantly as Hawaii continues its transition to cleaner renewable energy. As a result—and notably unlike ICE vehicles—the overall amount of CO2 associated with energy production required to power EVs will continue to decrease annually.

EVs support the integration of more renewables on the electric grid with smart charging technology and rate structures. Thus, proliferating EVs throughout Hawaii can help accelerate progress towards the state’s 100% RPS goal. In 2019, the state reached 29.79% of total energy sales from renewables, which is on track to meet the state’s 2030 goal to increase renewable energy in the electricity sector to 40% of total annual output, according to data from the Hawai‘i Public Utilities Commission.

Do EVs still cost more to purchase and maintain?

In short, no. In addition to their environmental benefits, EVs, unlike ICE vehicles, offer their owners cost savings throughout the lifespan of their usage. With fewer moving mechanical parts than ICE vehicles, EVs save owners time on automotive service and money on maintenance fees. They don’t require oil changes, air filter replacement, or other maintenance charges and repairs associated with ICE vehicles.

That’s on top of an average $507 per year fuel savings by switching from gas to electricity, according to the Union of Concerned Scientists (Going from Pump to Plug, 2017), despite residing in a state with the highest electricity rates in the country.

The “fresh-off-the-lot” price of an EV, which tends to be higher than a similar model ICE vehicle, may still be a deterrent for some buyers. However, with the ever-growing number of make and model EV options unveiled by automakers in recent years, these costs have continued to drop significantly. Plus, federal rebates still exist to encourage mass adoption of EVs.

Used EV models can also be found for sale at very reasonable prices. Auto-enthusiast website CarBuzz reported in February that it found used recent Chevrolet Bolt models on sale for $12,000 with less than 60,000 miles on their odometers.

Fiat’s 500e, which can travel a distance of 84 miles on a single charge, is an ideal EV for short commutes, or urban living. Its compact size makes the model an excellent choice for easy parking, and some Fiat dealerships are leasing 500e models for under $100, making them a great value for college students or for a family’s second car (if needed).

What about global trends in EV production and adoption?

Globally, automakers are shifting more rapidly toward EV production. General Motors (GM), the largest auto manufacturer in the United States, announced in January that it would make a mass shift to 100% electric-vehicle production by 2035. GM’s move aligns with many other auto manufacturers, as well as a number of countries that have set policies to eliminate, or ban, the sale of ICE vehicles, further indicating time is quickly running out on the era of ICE vehicles.

Skeptics have perceived this mass industry transition from ICE to EV production as a harbinger of countless job losses, but as the saying goes, “When one door closes, another one opens.” In actuality, the growth of EV adoption and production provides remarkable opportunities for job creation in the areas of renewable energy, EV manufacturing, and EV charging deployment and operations.

Take this highlight from California, as an example:

“California’s EV industrial growth pushed the state’s motor vehicle manufacturing workforce to a record 18,900 in 2018, double the highest number of motor vehicle manufacturing jobs in the years before EV manufacturing started taking off,” stated Chris Busch, director at Energy Innovation, in his recent article in Forbes (Why Electric Vehicles Will Likely Emerge As California’s Top Manufacturing Export In 2020, September 2020). Busch cites 2018 statistics showing that the EV supply chain supports 275,000 direct jobs in California, including 120,000 in Southern California, with an average wage of $91,000.

“The rise of EV manufacturing in California is a case study in how clean energy leadership can translate into manufacturing job growth,” he wrote. “Without the state’s strong policies, including the world’s first Zero-Emission Vehicle Program starting in 1990, the state’s EV manufacturing sector probably would not exist today.”

Equally important to a healthy economy are other benefits often missing from the bottom line, including healthier, cleaner communities.