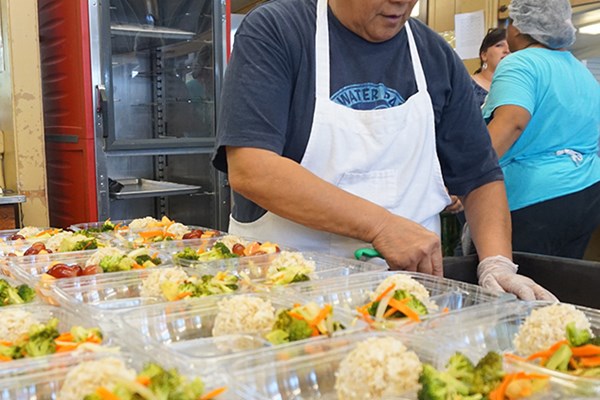 With the signing of House Bill 767 HD2 SD2 into law (Act 175) on July 2, the Hawaii State Department of Education (DOE) is now committed to buying more locally sourced food to ultimately help strengthen Hawaii’s food production market and its resilience.

Passed by the Hawaii State Legislature in its 2021 regular session, the bill moves the state’s Farm-to-School program under the scope of the DOE, the Hawaii state government’s largest department. The bill also requires that, at minimum, 30% of the food served in public schools be sourced locally by 2030.

The pandemic exposed Hawaii’s risky reliance on just-in-time delivery to import between 80% and 90% of its food. The signing of HB 767 reflects recognition by state leaders of the significant role government must play in supporting local farmers and ranchers, who are critical to Hawaii’s food production resilience. In addition to Gov. David Ige, who signed the bill into law, credit for its passage goes to Rep. Ty Cullen, who spearheaded the bill during the 2021 regular legislative session, as well as Reps. Mark Hashem, Sylvia Luke and Amy Perruso who also embraced the bill.

With the DOE serving students at 287 schools, saying it is Hawaii’s largest restaurant operation is not an exaggeration. And with students returning to classrooms, the progress of the DOE’s farm-to-school programs is now expected to accelerate. According to its records before the pandemic, the DOE served more than 103,000 lunches and more than 32,000 breakfasts daily. Even so, less than 3% of that food was locally sourced, based on available data.

It may seem “easier” to import everything or contract one or two bulk suppliers of bulk food. To be fair, this may often be so. However, it goes counter to the state’s own local food-production goals, and we can do better. The DOE spends about $45 million on food every year. Buying locally sourced food will also help future-proof student access to meals, as well as strengthen the local food production market—in a way that few institutions other than government can do because of their sheer size.

Not to mention, relying heavily on importing food also ignores the potential of disruptions in the national food distribution chain like we saw during the pandemic. Other disruptions from climate change such as a Category 4 or 5 hurricane, or a tsunami could put our harbors and airports out of commission for weeks or months.

Additionally, pilot projects at schools on Kauai, Oahu and the island of Hawaii successfully demonstrated how local food procurement can be successfully expanded and even yield savings. In one semester, the pilot project in Kohala increased locally sourced food content from 2% to 24%, and a Mililani pilot project increased locally sourced food content from 3% to 15%. Also in just one semester, cafeteria savings in the Oahu and Hawaii Island pilots were $108,000 and $31,000, respectively.

Based on these numbers, increasing local food in DOE meals to an average of 30% of the DOE’s existing food budget would create as much as $14 million in additional demand for local food every year. That’s a strong market around which local agricultural producers can build.

Together with House Bill 817, HD2 SD2 (Act 176), which extends minimum goals across all state departments for the local produce they purchase, residents are assured that state government will begin practicing what it preaches. Applying the combined power of institutional purchases across state government will help support local farmers and ranchers with a consistent market, provide fresh and healthy products to the community, and keep state government money here in the Islands.

“With students returning to classrooms, HB 767 will not only support the state’s farm-to-school programs but accelerate them. Meanwhile, HB 817 will ensure our state government — across all state institutional programs — is leading by example to support our local agricultural community,” said Murray Clay, president of Ulupono Initiative. “These farm-to-school and farm-to-state bills will be as impactful to the local food sector in Hawaii as the 100% renewable energy bill was to Hawaii’s energy sector. Harnessing state purchasing power will help agriculture grow again as a sector in the Islands.”