Ulu seen as a key ingredient in Hawaii’s food security 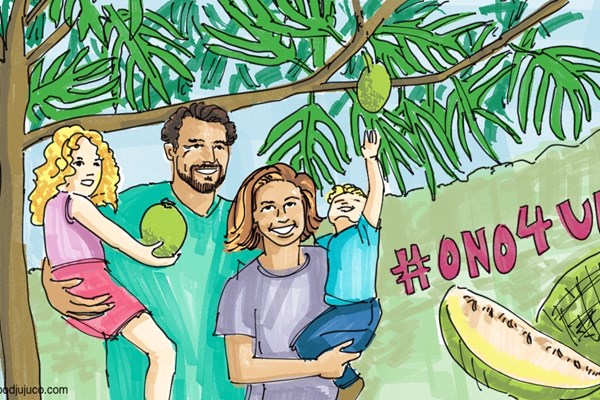 Our weekly series continues, talking story with local farmers, ranchers, and other food producers about their crucial efforts to sustain our communities during the coronavirus pandemic.

A conversation with
Noa Kekuewa Lincoln and Dana Shapiro

By Dani Douglass and Keith DeMello

By now, it’s fairly common knowledge that Hawaii relies on importing as much as 90% of its food, a reality the pandemic has exposed for the gamble that it is.

But things get even worse when you consider categories of food. In fact, less than 0.5% of all carbohydrates consumed in Hawaii are produced locally, according to Noa Kekuewa Lincoln, assistant professor at the University of Hawaii’s College of Tropical Agriculture and Human Resources (CTAHR). When we talk about really feeding people, it is carbs that are the staple of a good diet. The small amount of uala (sweet potato) grown locally mostly gets exported, and Hawaii actually imports kalo (taro) to supplement the local supply.

On the opposite side of the spectrum is ulu (breadfruit), which is nearly 100% locally consumed. Increasing availability and consumption of the indigenous starch is seen by many as a natural way to increase food security. It could also reduce food importation’s carbon footprint, create better farming systems, provide significant health benefits, and help to preserve cultural norms, values and traditions.

Cultivating and distributing this Pacific superfood is led by a core group of individuals who make up the Hawaii Ulu Producers Cooperative, including Lincoln and his wife, Dana Shapiro, who are founding members.

As a couple, Lincoln and Shapiro represent cross-sector synergy encompassing research, production and collaboration. Their shared love of the land extends to the farm they started five years ago, which has grown into the co-op. While Lincoln’s work at CTAHR focuses on indigenous crops, Shapiro manages the co-op.

The couple also operates the Mala Kaluulu breadfruit farm on Hawaii Island, growing ulu alongside “co-crops” of turmeric, kalo, mamaki (Pipturus albidus) and kava kava. Obtained through Kamehameha Schools’ Mahiai Match-Up contest, the farm equipped them with a 3.7-acre plot, five years of waived rent, and $25,000 in seed money. Through the farm, they seek to restore and evolve the traditional agroforestry systems that played a crucial role in ancient food security in Hawaii, and couple their production with research and educational efforts. Although most organizations seeking diverse social impacts incorporate as non-profits, Lincoln said that they choose a for-model profit for the farm because they wanted to show that an operation around traditional crops can stand on its own two feet in our modern food system.

However, they didn’t have the volume to supply a growing, year-round demand for the seasonal and labor-intensive crop. And that’s when they began to recruit other farmers in similar situations who shared their passion for ulu. The co-op was established in 2016 with nine pilot members. All co-op members have partial ownership and represent a range of farmers – from backyard to full-time. Shapiro obtained initial grants from the U.S. Department of Agriculture, state Department of Agriculture, and Ulupono Initiative to develop a small processing facility and organizational capacity, and the co-op has grown substantially since then.

“Funding was needed to cover basic operating expenses like paying members for their initial harvest, hiring a manager, and purchasing basic processing and packaging supplies like boxes, bags, coolers and labels,” Shapiro said. “In our first year of operation from August 2016 to July 2017, we distributed about 18,000 pounds of fresh and processed ulu. In year two, we more than doubled that.”

As a carbohydrate-rich food, ulu is being rediscovered as a viable part of Hawaii’s food system, which produces a very small amount of staples like rice, wheat, corn, potatoes or cassava. A few of the health benefits of ulu include its high-quality protein content and a low glycemic index, especially beneficial to those with diabetes. On top of that, ulu is one of the highest yielding food trees on earth, producing up to 200 fruits each year.

The early days of the co-op mirror how Lincoln and Shapiro have responded and pivoted operations through the COVID-19 pandemic. They already had a strong partnership with The Food Basket, Hawaii Island’s food bank, and the co-op is now involved in the #ONO4ULU Relief & Response campaign. This program allows individuals and organizations to donate $20 bags containing five pounds of frozen ulu, uala, squash or green papaya to families in need.

“When I look at who’s been the most successful in this whole quarantine situation, it’s been the organizations that are focused on community service, collaboration and have good relationships,” said Lincoln, who’s research at CTAHR focuses on indigenous crops.

Lincoln hopes that through this crisis and recovery, the agriculture sector can grow and help Hawaii to become more resilient. He’s also been impressed with the number of young people working to improve the agricultural community.

Like others in the sector, he advocates for a clearly defined process to obtain more institutional contracts, which will increase the ability to get local products to more people’s tables. State institutional purchasing has enormous potential — like the Hawaii Department of Education committing to making a percentage of student meals locally sourced.

“Many issues are a chicken and egg thing,” he said. “Something has to give to allow these development cycles to happen. It’s difficult for small producers to procure. It’s hard to get financing because you don’t have a contract. Without financing, you can’t scale up to qualify for those contracts in the first place.”

He added that consumer choice is also key: “When we talk about resilience, we tend to think about production, big facilities and marketing. But we rarely talk about consumer behavior. In the current situation we are seeing unpresented changes of how individuals access food.  We need to think about how we can keep that change as we are allowed to return to ‘normal’.”

The question is whether our state will go back to the same behavior that got us in this position.

For those wondering what kind of nutritious and delicious dishes can be cooked with this starch star, Lincoln’s favorite is an ulu burger. Find recipes for an ono ulu burger as well as ulu chips, ulu mochi, ulu chocolate truffles and more on the Hawaii Ulu Producers Cooperative website.